EINAR JOHANSEN
Einar Johansen was born in 1906 he originally trained as a painter at the Royal Danish Academy of Fine Arts in Copenhagen. He changed his mind and became a ceramicist.

Between 1935 and 1958 he had his own pottery and then began to work at Soholm until the mid sixties when he went back to having his own studio.

He was employed at Søholm in the period 1958-1968, and designed several, beautiful stoneware and pottery – among these, his famous blue glazed stoneware.

He worked for Knabstrup (a Danish Pottery) in the early 1970s. (https://www.lynways.com) 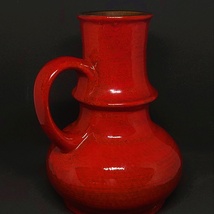